To view the full rules and regulations, click here.

Wheelchair rugby is an exciting, action packed sport invented by quadriplegics, for quadriplegics. Played on a regulation-size basketball court, the object of the game is to move a volleyball down the length of the court and carry it across the opposing team's goal line. The ball may be passed, thrown, batted, rolled, dribbled or carried. Goals are located at each end of the court, span eight metres in length, and are marked by two orange cones. Each game consists of four, eight minute quarters.

Teams consist of four players each, and each player is classified according to his or her level of disability. Athletes are numerically classified by their function, ranging from .5 to 3.5, with the lower numbers depicting players of lesser functional ability, and the higher numbers depicting players of increased functional ability. Each team may have no more than 8 points on the court at one time (the combined total of all four players' classification levels cannot exceed 8). 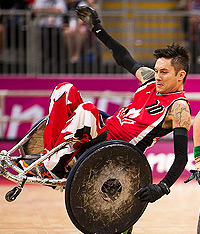